Aim of the game :-
Play as Funky Monkey Kid to try and free Funky Kung from the Baddie by collecting 4 keys in a row to unlock the cage.
(From experience, it is easier to use the M key for jumping on real NEXT hardware)
Move left to right and jump up to hold onto vines.
You can only hold onto single vines for about 5 seconds but you can hold onto the double vines indefinately.
Jump into the air to jump over the crocs, but beware of the birds.
You can not move past a croc or bird so must navigate around them.
Jump for the plum to knock it loose to kill crocs and birds underneath you.

Control :-
In Game;
QAOP M/Space or Joystick to move the Kid up, down, left, right and jump.
Press Left and Jump at same time to get key when at edge of platform.

Game Mechanics :-
For each 100 points you gain, the frequency of baddies increases.
Score more than 999 to increase level speed.
Score will reset to 0 after 999; your real score however is still racking up in the background.
Game is over once all 3 lives are lost.

Spectrum Next specific enhancements :-
There is a Layer2 bitmap used for the background.
If a realtime clock is enabled, it will show the clock in the demo loop.
The graphics are 48k standard but with opacity giving the true LCD look and feel.
The Hi-scores are saved to a file on the SD card, labelled fmk.hs
You can remove the fmk.hs file if you wish to reset the hi-scores.
The fmk.hs file will re-create itself if it does not exist.
The sound is produced with the internal buzzer/speaker of the 48k model so ensure this  is enabled in the core if you wish to have sound.

V1.03 - Added secondary joystick button to perform jump so for new joysticks such as those from retroradionics, you can use it either left or right handed.

V1.02 - Optimised some more bits - free up a lot of spare bytes.
Added Kempston or Sinclair SJS Joystick option in instruction menu
Improved clock feature on Next mode
If choosing to emulate 48k on Next or running on 48k real hardware, then no clock.
Found and fixed bug in relation to level and scoring (gained 1000 points each play if past 999).
48k Backdrop fixed - noticed missing Y on Funky on top banner on some youtube videos! Doh...
With spare space, was able to add a better loading screen.

V1.01 - Name rebranding (suggested by many just in case!)

Known bugs :-
Fixed as described in version release notes, so none currently known.
If you believe you have identified a bug, please comment on my bootlegger.itch.io page preferably
with description of how you feel it occurred - and if you can reliably replicate it.

Future enhancements :-
Fix any reported bugs - if space allows!
Dependant on feedback I may change the scoring to show the thousand value.  *
* The reason for not doing so is that the original hardware does not and I wanted to emulate it as perfect as possible.
The score did loop at 999 on the real hardware.  The score in this version doesn't really loop at 999, it just appears to.  Your real score can still be seen when starting a new game by holding down the key at game start.
Any recommendations taken on board - please comment on my bootlegger.itch.io page for any feedback.

Ramblings :-
I have long been a supporter of the spectrum (coming on for 40 years now!)
I have been supporting the spectrum community with writing various things for the spectrum platform itself,  and tools for other systems such as a microdrive cartridge reader for the PC.

Of recent there have been many interesting developments in the spectrum community, and most notably of course  the Spectrum Next.  I backed this and have a dev board ans an issue 2A both fully expanded.
I have been sitting on my Nexts for some time wondering when and where I could get the time to do something with it.
With the advent of Covid, it forced my hand on a few changes at home, and now I have a better setup to do development work.  So now with a little more time and incling, I looked into what I could do on the Next.
I am a fan of ZX Basic and I know there are a lot of new nice features in the Next basic, but I know from experience that it can be slow so I wondered what other options are out there. I was fortunate to come across a community called
BorIDE/ZXBasic that had been expanded upon with a Spectrum Next Library.   This seemed right up my street!
It follows a BASIC syntax with a more structured schema and compiles the instructions into machine code.  It also allows for inline assembly which was a much bigger draw for me.
I spent a bit of time setting up my dev environment and am reasonably happy with it now.
I can compile direct on PC and emulate in CSpect.  At the same time, I have a NextSync program by Jari LKomppa running that waits to sync files to another host, and on my Next, at boot up time, I call the sync command, and a copy of any
changed files are copied down to the Next, over WiFi.   No wires, no swapping SDs, no fuss - just fast and easy to test on real hardware.

So now having a setup I could work with, I wondered what I could bring to the spectrum community.
I have had a certain LCD Game and Watch since the early 80s and this brings back fond memories for me, of holidays in the sun playing this until I mastered it.
I attempted to write a version on the spectrum back in the 80s in BASIC, called Funky Monkey, but didn't get very far.
As time moved on I developed software for the Game Boy Advance.  Again I tried to re-create this game for the GBA.
To achieve this version I had disassembled my Game & Watch, scanned in the overlay and also the sprites.
The GBA version I got to a point where the kid could move around, but never did finish it.
I have luckily been holding onto these assets (real hardware, and scanned images) for years now!

So.... A Spectrum Next, Assets in hand, and some free time of an evening conspired into me producing  what you see today!

Its been a tough learning curve and there is still a lot more for me to learn.

A large amount of thanks must go to em00k who has been tremendously supportive in getting this final release out,  as I was hitting some snag points towards the end of the development - mainly due to my inexperience with the
development system in use.

Signing Off :-
Enjoy the game and if you fancy supporting my hard work, please donate during download on my itch.io page.
Beer and coffee doesn't come cheap nowadays you know 8)

This is just donkey kong jr

Correct. This was by design.  If you read the instructions if was fairly evident.  I fail to see your point in your statement? 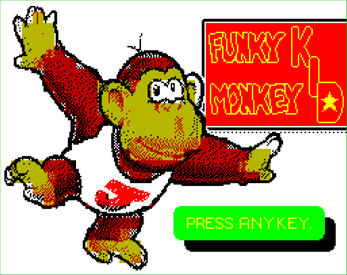 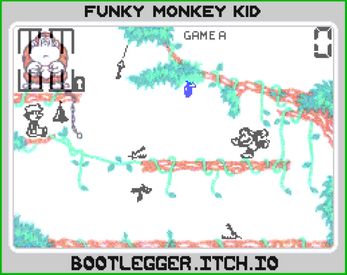 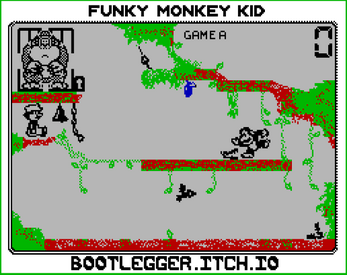