Wrote this for a series on the Spectrum Show.

Source is available on my personal website at https://sites.google.com/site/...

Heavily uses the Currah Microspeech engine so recommend you find either spectaculator or zxspin for emulation, or real hardware to play it.

Navigate the play field avoiding all robots.  Take too long and a smiler will come to trance on you!

Shoot the enemies if you wish.  Enemies will always track towards you

Avoid wall at all costs.

Follow direction of arrow to try to escape the maze.

Enemies will fire back after a few moves, and will gradually get more aggressive.

End sequence if you escape, not just a simple well done message....

Use QAOP and space to move and fire.

First off, let me thank you very much for the purchases.

I dont know what happened to the link - it shows 0 bytes.

I have since re-uploaded the z80 file so please try to download again.

If you still have issues with downloading, you can also try my alternate site of https://sites.google.com/site/bootleggersrealm/Downhome/Topic3 which has it in tap format, and also the source code if you are interested in the code behind it all.

I do hope you enjoy the game, and I highly recommend using a currah microspeech device if you are playing on real hardware, or if emulating, try using the Spectaculator emulator as this does a very good job of the currah emulation.

Also, if you are interested, I developed this for the Paul Jenkinson The Spectrum Show series, so if you have an interest in all things Spectrum, I highly recommend watching the series. This was included in Season 5 from episode 1, or Episode #41

Hi there. It's downloaded thanks, when I run the game in Spectaculator it comes up with the coding, but when I type run the game starts. This doesn't sound right. I then downloaded the Tap file which runs but the character you play flashes between letters and numbers???? 😕

Fair point about it not auto running but by not running it yourself you miss out on the nice border effect on the preparing graphics routine.  i have updated the downloads as z80 and sna snapshots whicg are default at the menu, ready to play.

I have been unable to replicate the issue about the character swapping between letters. the character itself looks like a letter i and when running could be seen as a letter k i guess but working on an 8*8 pixel boundary doesnt give you a lot of scope for detailed graphics 8)

I have tried many flavours of spectaculator with different hardware setups but all seem normal to me.

if it is definately not graphics but letters being shown, it would be interesting to know your setup in spectaculator and a screen shot of the issue which  may help me diagnose the issue.

the main characters graphics are UDGs over the letters e through to o so it could be represented by these letters if the graphics routine has not been run through, but the snapshots have already had the graphics compiled into memory so this should not be the case.

i know emulators like retrovirtualmachine can override the model type so can run the game as a 128k model which does corrupt the game as not all UDGS are available in 128k mode but this still doesnt seem to fit what you are experiencing.

Ok cheers. I will try a different emulator. Thanks for sorting this out. 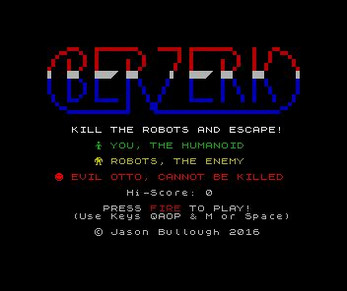 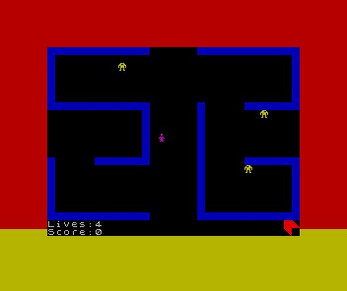 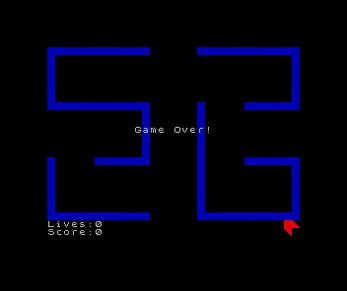 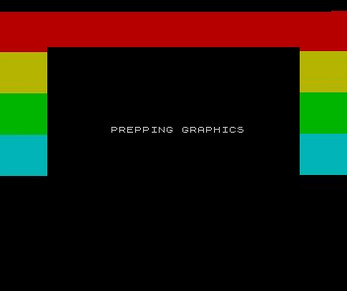 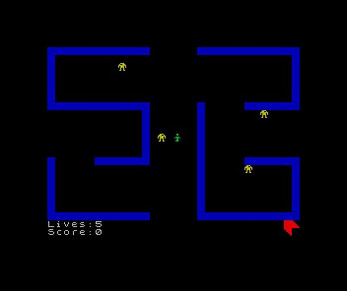